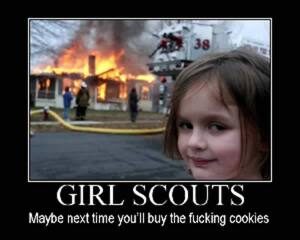 It’s Girl Scout Cookie time again. Not only are those cookies worthy of a good glutinous binge, but who can resist that timid knock of that neighborhood girl practicing the fine art of door-to-door sales? It’s also a great way for children to get first-hand exposure to capitalism, commerce, ownership, responsibility, and…hard work.  So what’s up with all of you parents who bring your daughter’s order sheet into the office?  Some people would argue that you’re depriving your daughter of a good experience…that you’re giving them a cop out…that you’re spoiling them.  Others would say your actions border on unethical.  But I say you’re doing them a favor and that there’s a hidden lesson there for any of those daughters who may one day end up in the business world.  And here’s the lesson:

“People who succeed in corporate America inevitably have people in high places who help them get there.”

It’s just too tough out there to go it alone…hard work doesn’t cut it any more…it is mostly about who you know…nice gals do finish last…the “Good ’Ole Boys Club” is alive and well.  I hate to say it, but it does matter whether you can play golf with the “big guys” (check out PunkRockHR today) or whether you can shoot the shit around the Super Bowl or whether you can smoke a cigar and drink scotch at a poker table.  And it will always matter when it comes down to promotions, evaluations, compensation, and any other “workplace competition” that you have someone in the room who can champion your cause.  Just like your parents are doing when they bring your Girl Scout Cookie order form into the office.  I have two daughters – only one of them is old enough to sell cookies.  We don’t even ask her to go door to door yet – that’s just too much for a 7-year-old.  She gives her pitch to her grandparents and close family and that’s it.  We end up buying most of the boxes, though; and that’s alright with me and my sweet tooth.  And I’m not sure I’ll ever bring her order form in to the office – it still kind of bothers me.  But I’m also not sure it’s such a bad idea either.  After all, helping your daughter – who will most likely one day become a working woman – get ahead in the workplace can’t be all that bad.

No comments to show.