Written on September 22, 2010 by Charlie in Environment 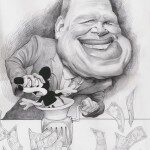 Michael Eisner is all sorts of excited about his new book, Working Together. He’s all over the airwaves, the tube, and the web promoting its virtues. This is a man who spent four decades in the entertainment and media business and helped turn Disney into a $80 billion global media empire as their chief executive. I’m thinking the guy has something worth sharing and my interest is at least peaked. The front flap describes the book as “an intimate and deeply personal look at some of the most rewarding business partnerships.”  I haven’t read the book but if I’m writing the cliff notes for it, I’m thinking they will pretty much read “when it comes to successful business ventures, two is better than one.” Now here’s the curious part of this literary jewel…the “most rewarding business partnerships” featured in his book are:

You should recognize most of these partnerships. If not, just follow the links…and while you do, check out the pictures of these fine folk. Michael Eisner has the privilege of so few: he has immediate brand recognition, a captive audience, and the opportunity (and responsibility) to influence the business community as we know it. While he chose an admirable subject, boy did he squander that privilege and responsibility by featuring only… you guessed it…white old men (excepting the chefs and the wife). Take a moment to check out Disney’s Corporate Responsibility Report or to reflect on the fact that they were recognized on Diversity Inc’s 50 Top Companies for Diversity in 2010. Michael, were you paying attention while you were working there?

The crime in all of this? Yet another missed opportunity for an influential figure to positively impact the business community.

There are no comments yet. Be the first and leave a response!

No comments to show.